UP GeogSoc is guided by 4 main principles: Academic Excellence, Camaraderie, Service, and Advocacy.

UP GeogSoc has been at the forefront of academic excellence, producing student leaders and academic achievers ever since its foundation, as well as organizing scholarly events.

Throughout the years, lasting friendships were formed in the organization. Even though it has been in different places over the past few years, the org tambayan has served as a haven and safe space for UP GeogSoc's members, where they have spent their time studying, playing, planning, meeting, and even sleeping.

The organization has remained committed to be of service to the UP community and to the nation as well, using geographic tools and concepts in community building projects and initiatives.

The organization advocates for the promotion of the holistic discipline of Geography at the forefront of local, national, and global development. Geography and its subfields such as cartography, GIS, medical geogrpahy, meteorology, and urban planning are powerful tools that could be used to help build communities and make a better society.

To help promote the discipline of Geography, UP GeogSoc organizes various events that showcase and highlight the social relevance and importance of Geography. 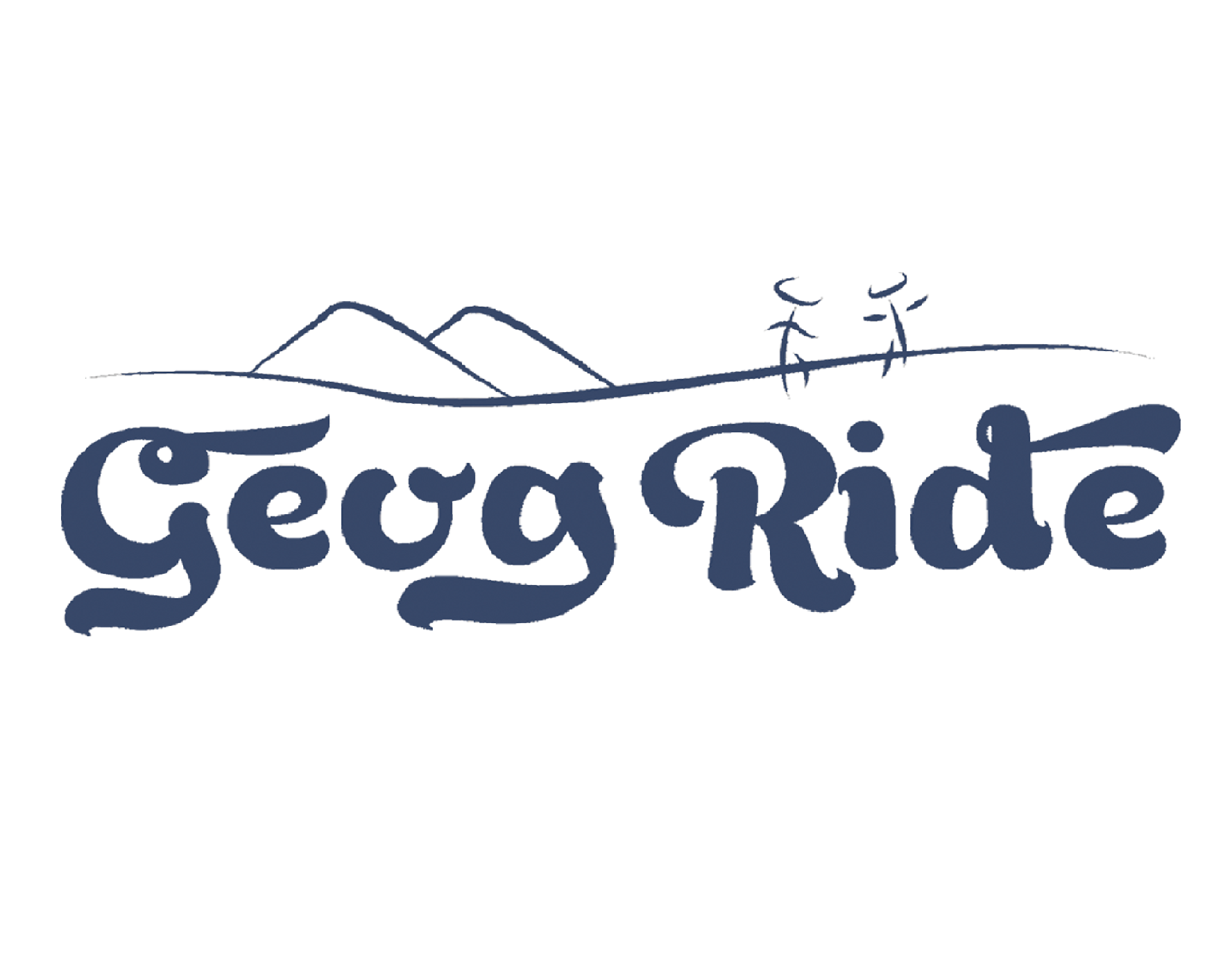 Geog Ride
A semestral field trip that focuses on the cultural geography of places and the appreciation of different landmarks and landscapes in the Philippines. 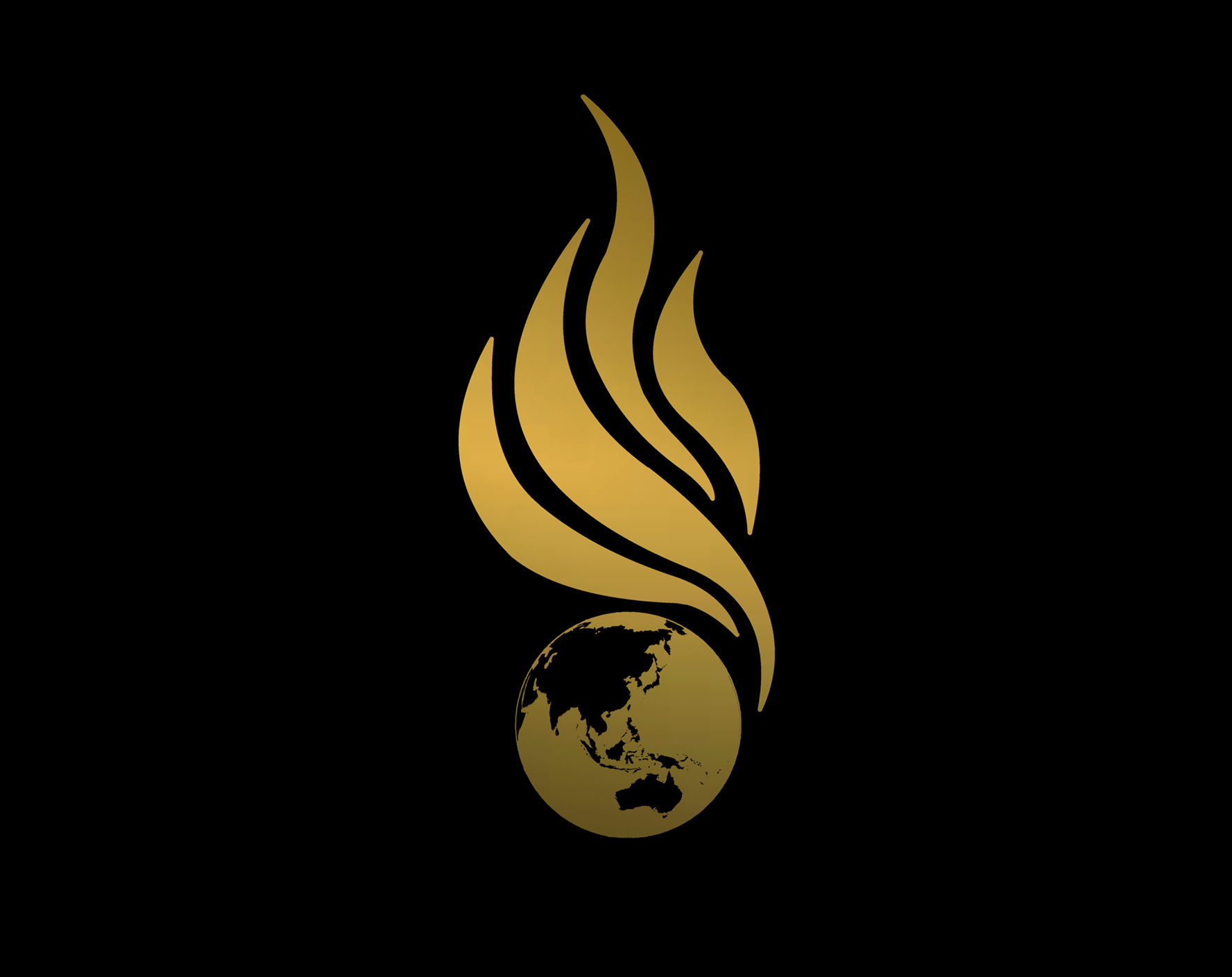 Perspective: The Geography Forum Series
A semestral forum that tackles various issues and discourses from a geographic point of view.

The Geographic Society of the University of the Philippines, also known as UP GeogSoc, is a college-based, non-profit and non-partisan academic organization. It was founded on 02 February 1963 as The Geographic Society U.P. by Ricardo S. Domingo, Jr. at the UP Diliman College of Arts and Sciences under the Department of Geology and Geography. Ricardo S. Domingo, Jr. also served as the organization’s first president. For a time, during the 1990s, the organization was also once known as The Geographical Society of U.P. UP GeogSoc’s very first faculty adviser was Dr. Domingo C. Salita, who was also the first professor of Geography to serve as the chairperson of the UP Department of Geology and Geography, and one of the pioneers of the discipline of Geography in the country. UP GeogSoc was initially a social club for Geography majors during its early years but has since evolved to become an academic organization composed of individuals who are driven together by the passion of making Geography a better-known discipline in the country and developing the practice of geographic inquiry, particularly in the Philippine context. It is guided by four main principles: academic excellence, camaraderie, service, and advocacy.


In 1972, after only 9 years of existence, UP GeogSoc, along with the other student organizations in UP during that time, was forced to suspend its activities due to the declaration of Martial Law and the ban on student organizations. UP GeogSoc was revived and its activities resumed in 1980 under the leadership of Darlene Occeña-Gutierrez after almost 8 years of inactivity. On 26 October 1983, when the College of Arts and Sciences was split into three separate colleges (College of Arts and Letters (CAL), College of Social Sciences and Philosophy (CSSP), and College of Science (CS)) by virtue of Administrative Order No. 170 by the UP Board of Regents, Geography became a separate Department under CSSP. UP GeogSoc continued its programs and expanded its membership under the newly created Department of Geography, and has been based in CSSP since then.


UP GeogSoc experienced a brief hiatus in the mid-1990s following the graduation of the members of its Executive Committee in 1996. During Jonas Gaffud’s presidency in 1997, activities and recruitment of new members for the organization resumed and intensified.


In 2010, under Hanie Sanchez’s presidency, the two flagship events of UP GeogSoc--namely Geog Ride and the Philippine Geography Olympiad--were established and held for the first time.


In February 2012, the Alumni Association of the Geographic Society of the University of the Philippines Inc. (GSUP Alumni Inc.) was formally registered in the Securities and Exchange Commission to establish an association that would maintain connections among the UP GeogSoc Alumni Members. The following December, GSUP Alumni Inc. was recognized as an Organization-Based Chapter of the University of the Philippines Alumni Association (UPAA).


In February 2018, UP GeogSoc officially became a student branch of the International Association of Young Geographers (IAYG) and became the first and only student branch of IAYG in the Philippines. It is also the largest student branch of IAYG in Southeast Asia. In May 2020, UP GeogSoc’s constitution was amended under the presidency and leadership of Jacob Jacela to update the organizational structure, internal processes, and membership rules of the organization. It was also done to make room for innovations within the organization. The constitutional amendment has also codified “UP GeogSoc” as the official abbreviation of the organization, replacing the abbreviation “GSUP” while still recognizing its historic and sentimental value. In October 2020, upon the formation of a new executive committee, UP GeogSoc made headlines, gained national prominence, and was featured in several news media outlets when its open letter to DENR undersecretary Benny Antiporda regarding his comments made against the UP Marine Science Institute went viral on social media.

VP For Academics and Research

VP For Events and Publicity 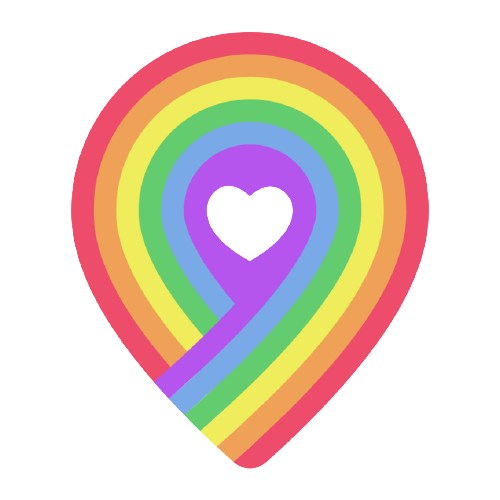 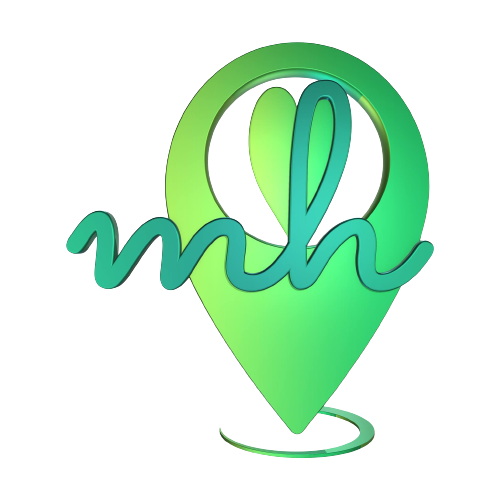 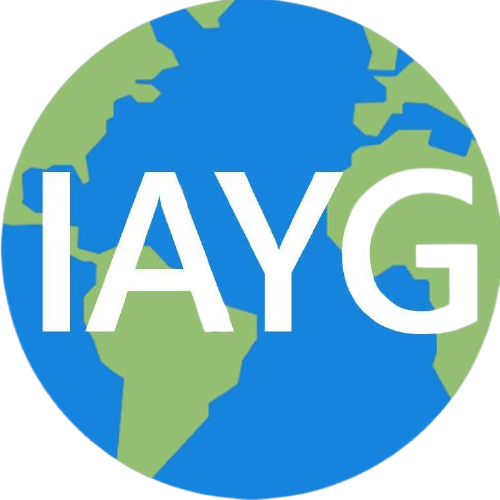 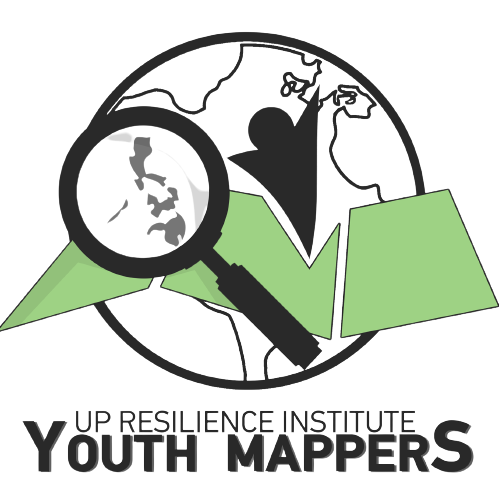 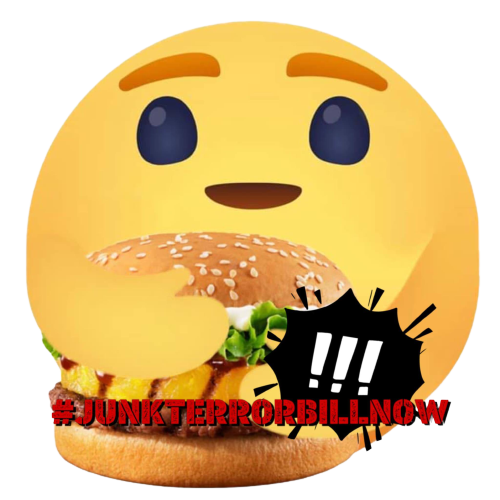 Are you interested in applying? UP GeogSoc conducts application processes every semester. Send us a message on Facebook if you want to know more. 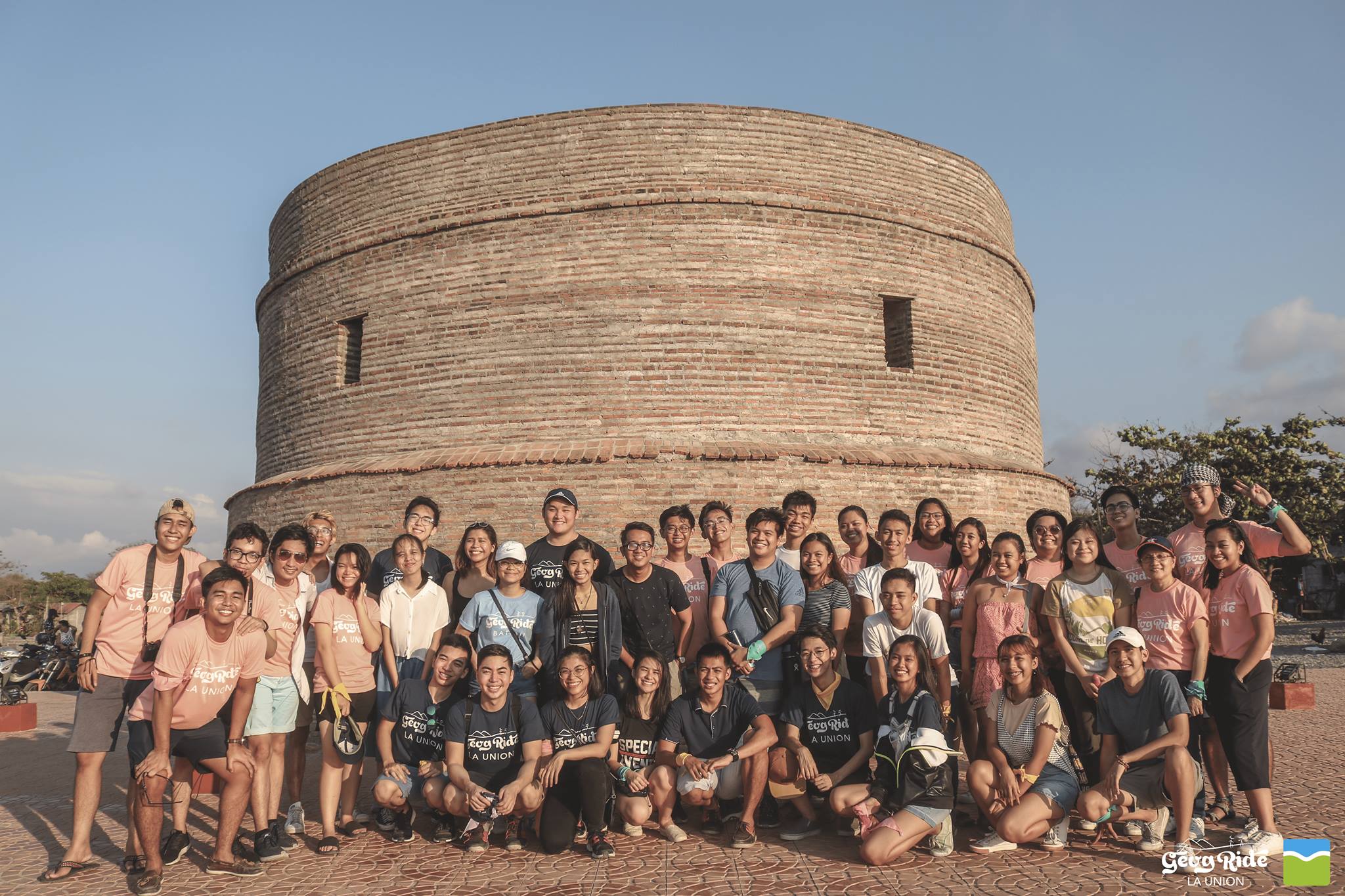 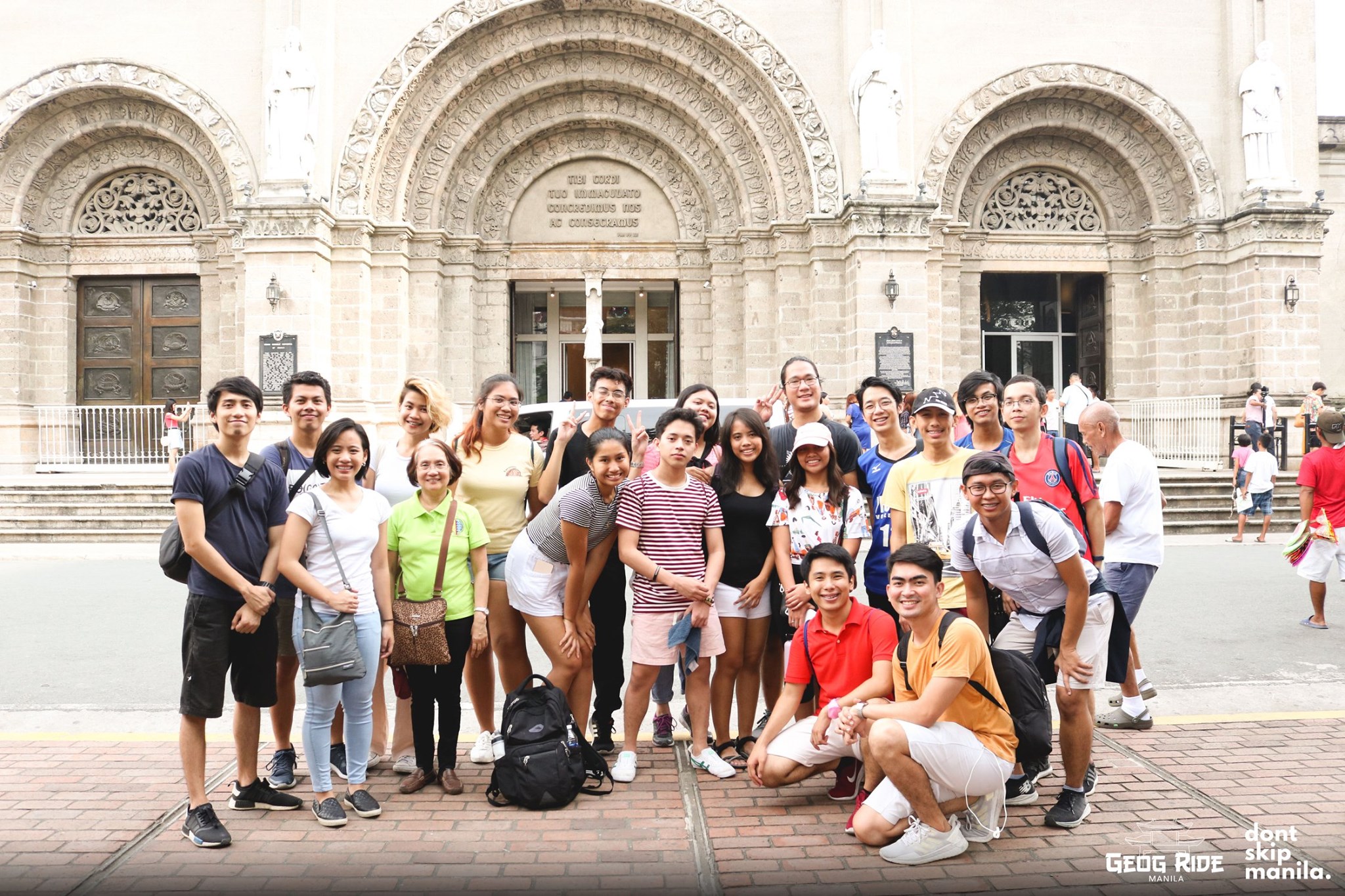 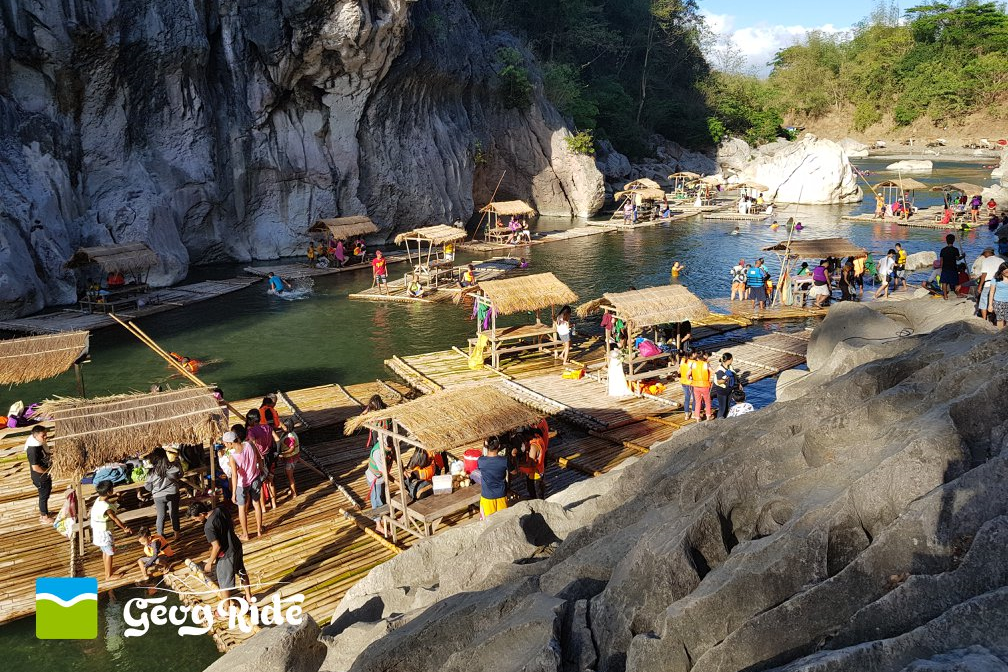 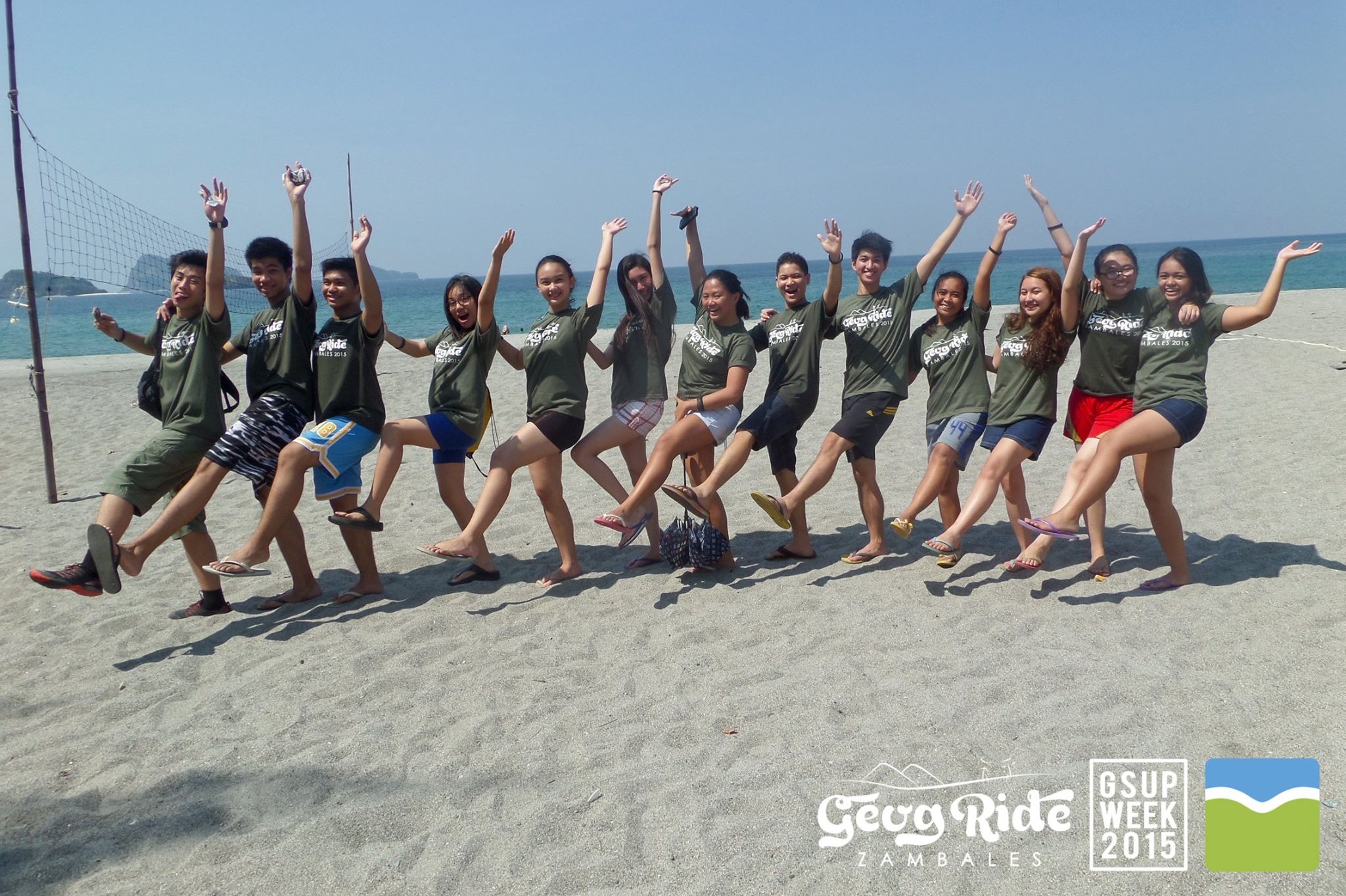 One of UP GeogSoc's flagship events, Geog Ride is a semestral field trip, specifically catering to Geog 1 students but also open to all college students in UP Diliman, that has been providing students an opportunity to gauge their understanding of their lessons in Geography, test the skills they have learned during class discussions, and apply them in real world scenarios. It also aims to make them perceptive specifically on the need for proper resource management and the advantages of sustainable tourism. Geog Ride also focuses on the cultural geography of places and on the appreciation of different landmarks and landscapes. Geog Ride destinations in the past include Pangasinan, La Union, Zambales, Bataan, Nueva Ecija, Batangas, Quezon and even Manila.

The premier and largest inter-high school Geography quiz bee in the country. 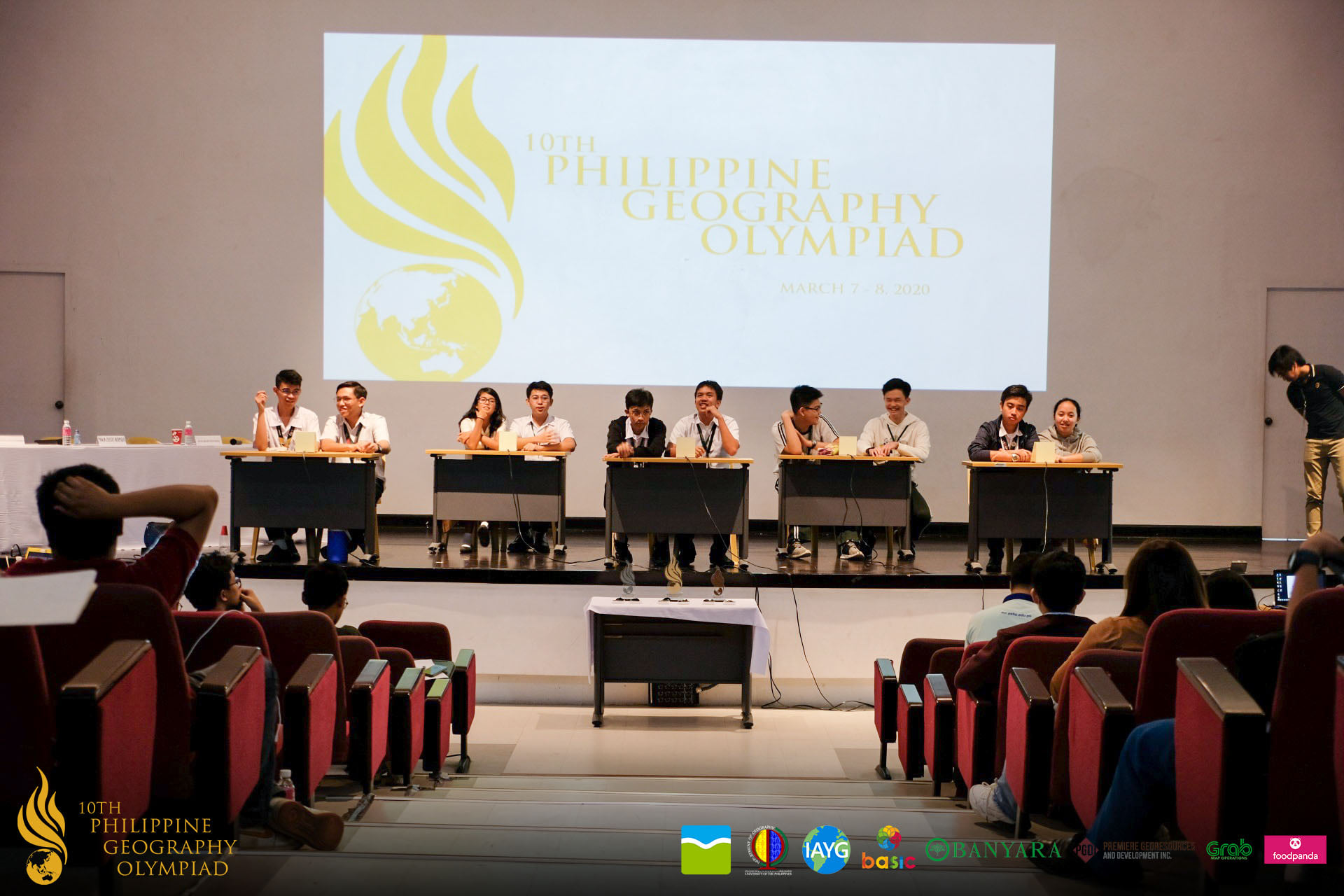 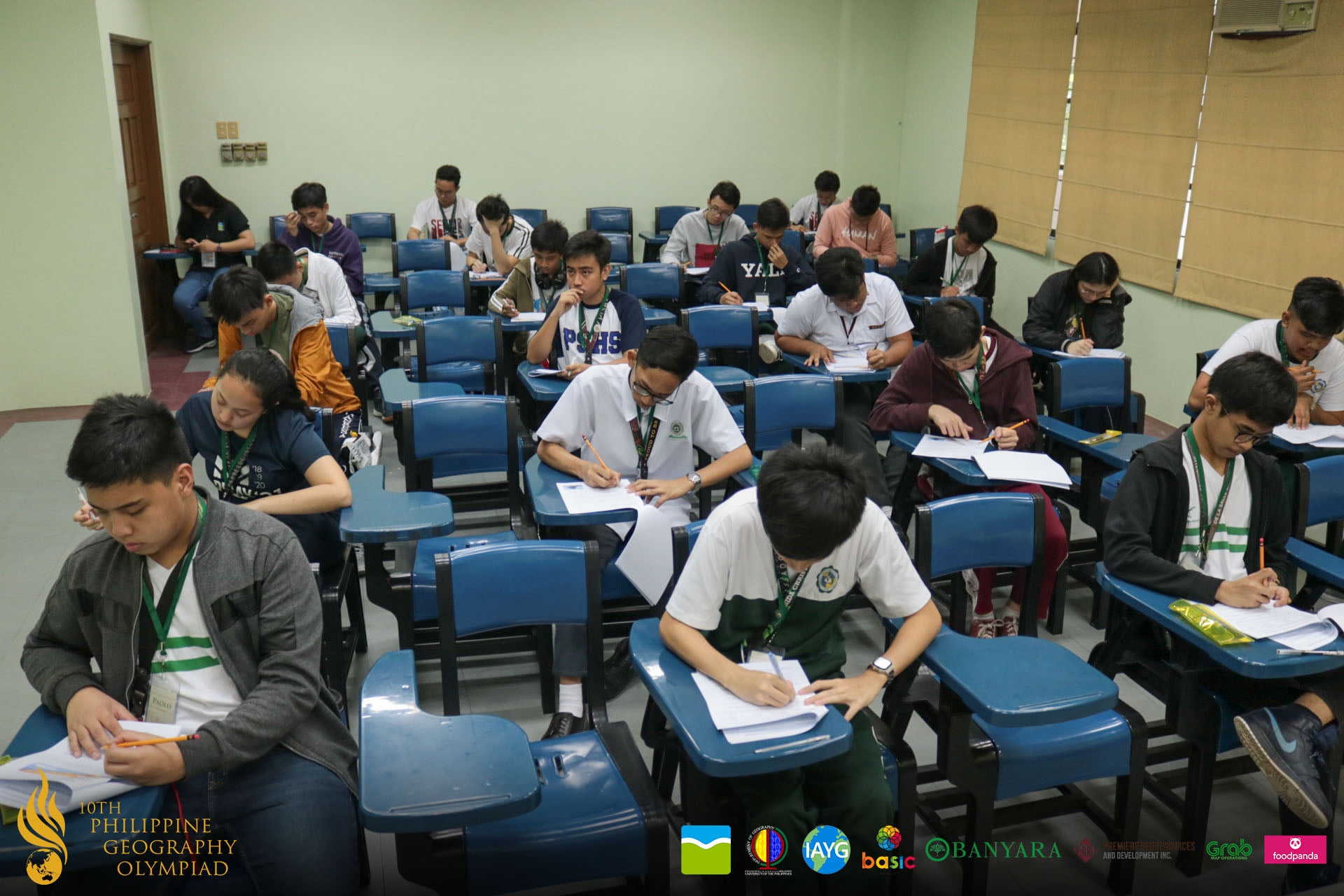 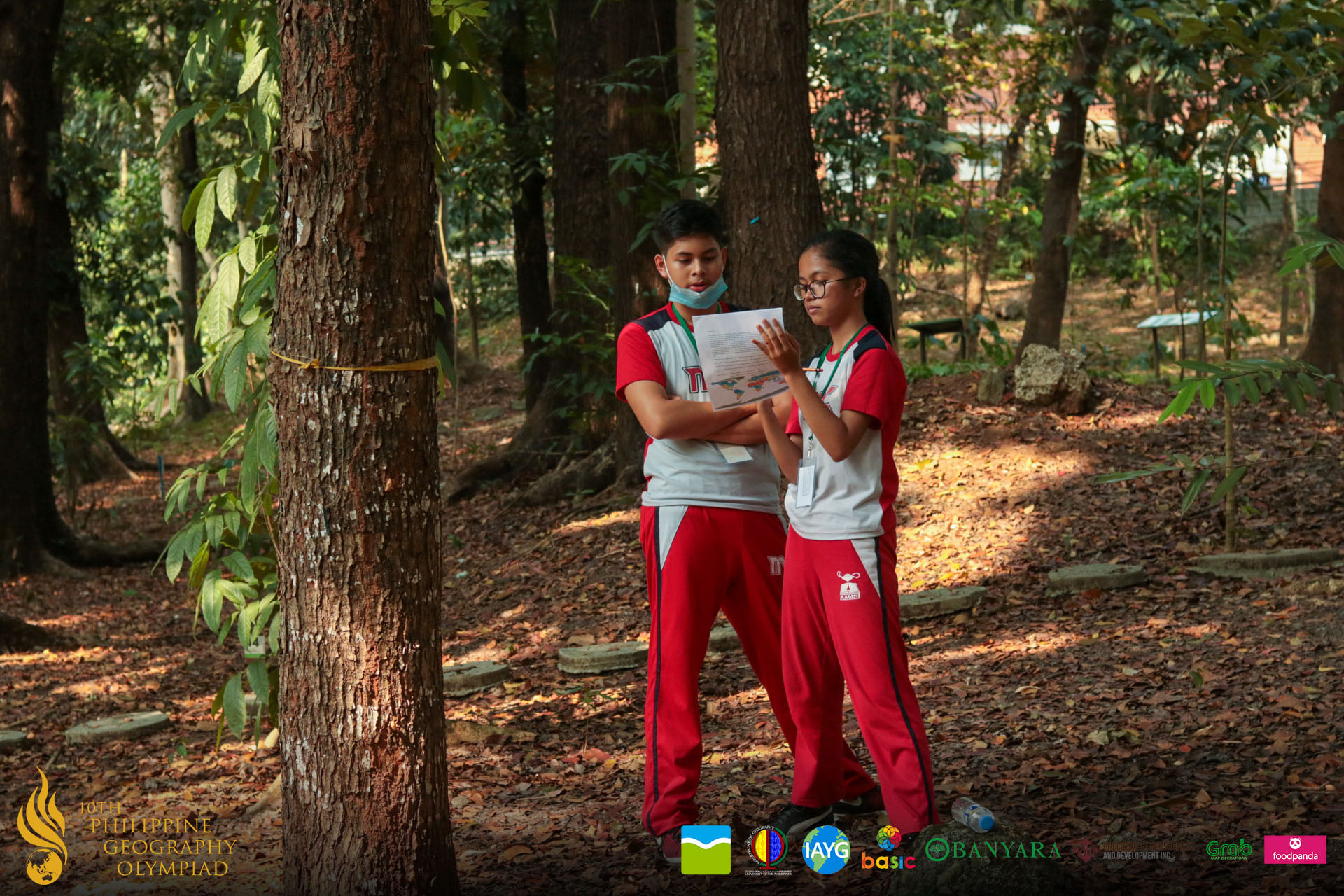 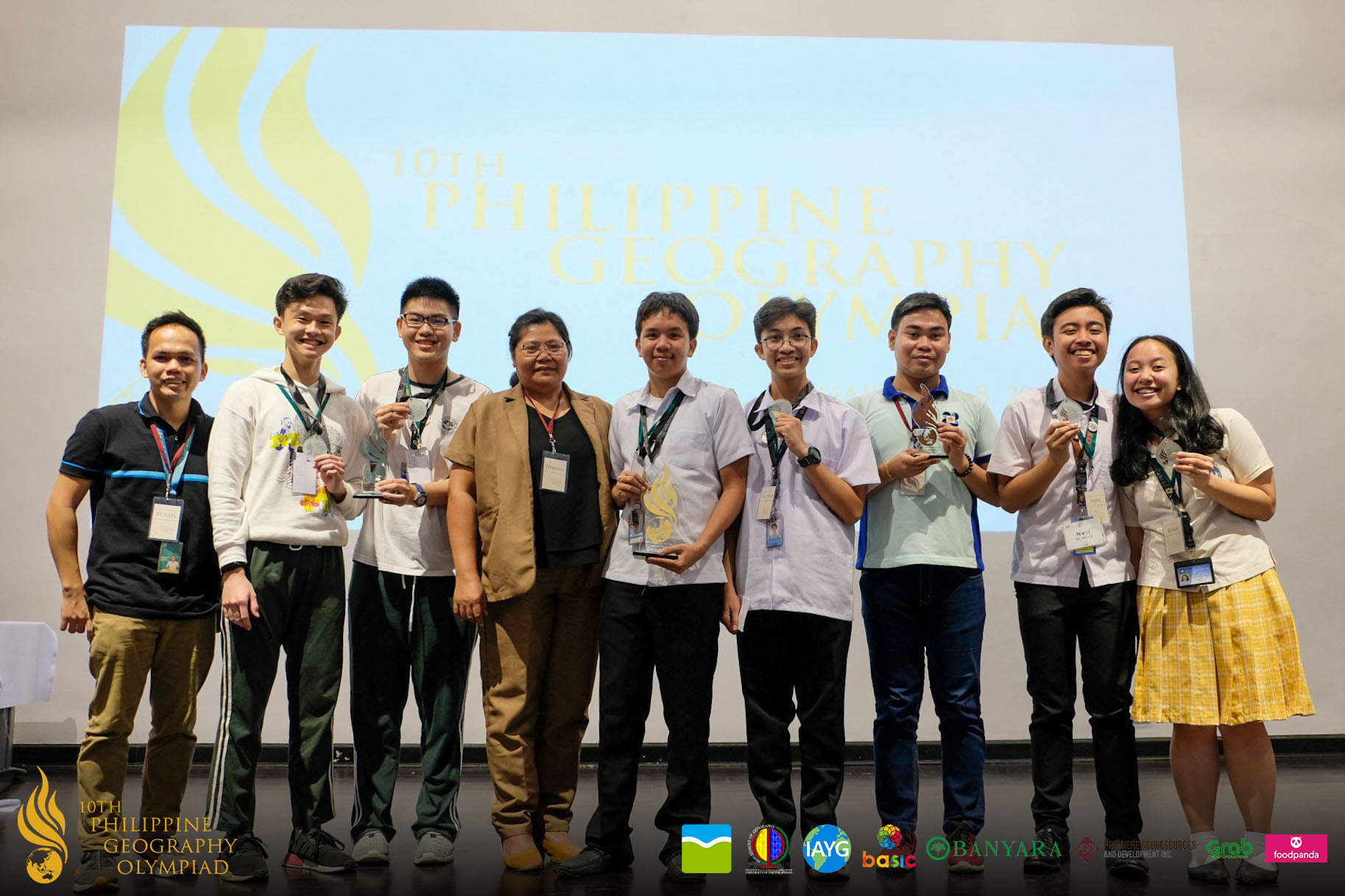 The Philippine Geography Olympiad (PGO) is the premier and largest inter-high school Geography quiz bee in the country. PGO is recognized by the International Geographical Union (IGU) as the country's official national Geography competition. Over 100 schools from different parts of the country have participated in recent years. The top 4 participants become the Philippines’ delegates at the annual International Geography Olympiad (iGEO). Since UP GeogSoc’s affiliation with IAYG in 2018, the IAYG has helped in organizing the event and has provided additional resources and support to UP GeogSoc. Since the 10th edition of PGO, the event is now held for two days and now features a field exam, where participants were given the chance to experience on-the-field application of geographic concepts.

A semestral forum and discussion about different geographical topics and concepts. 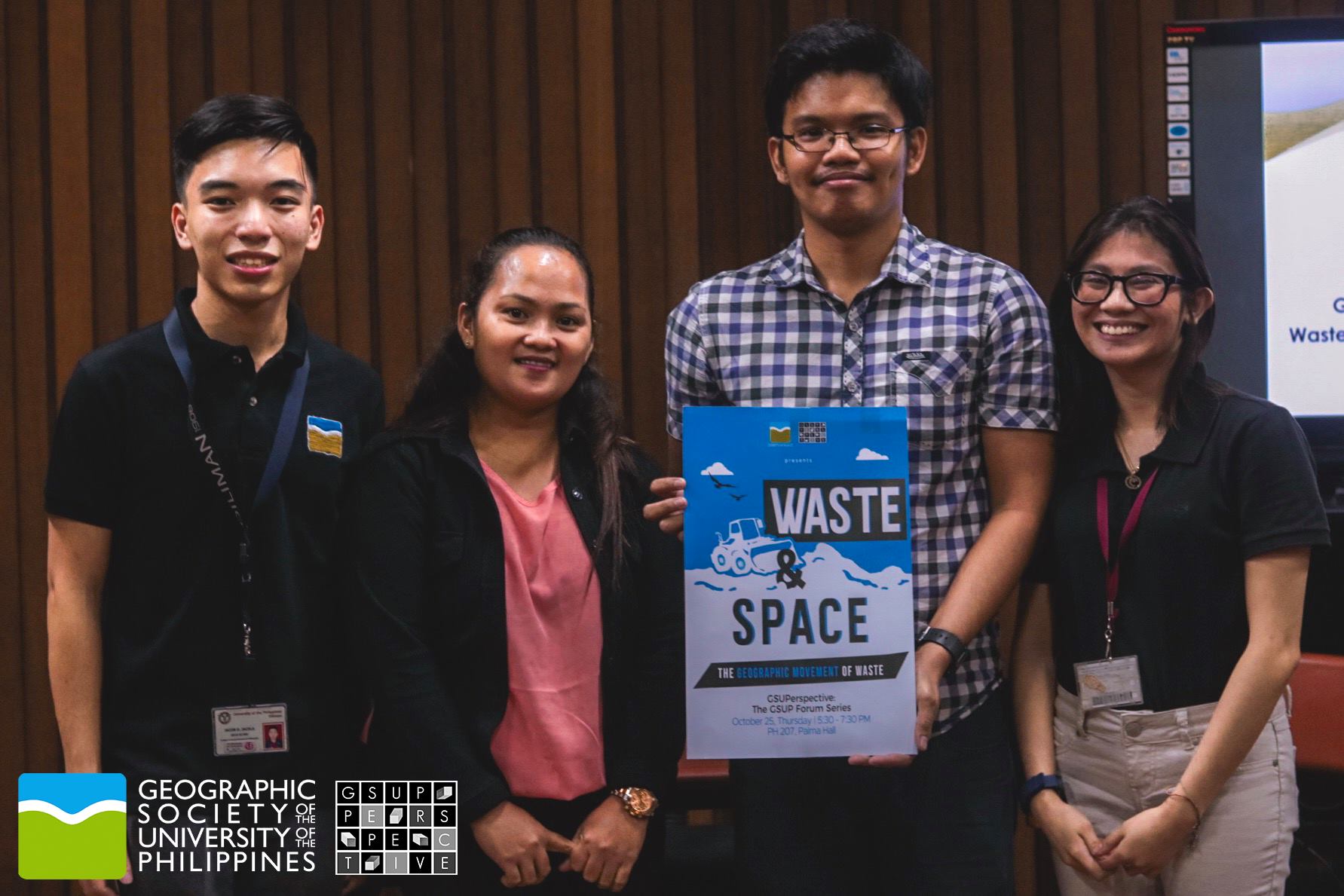 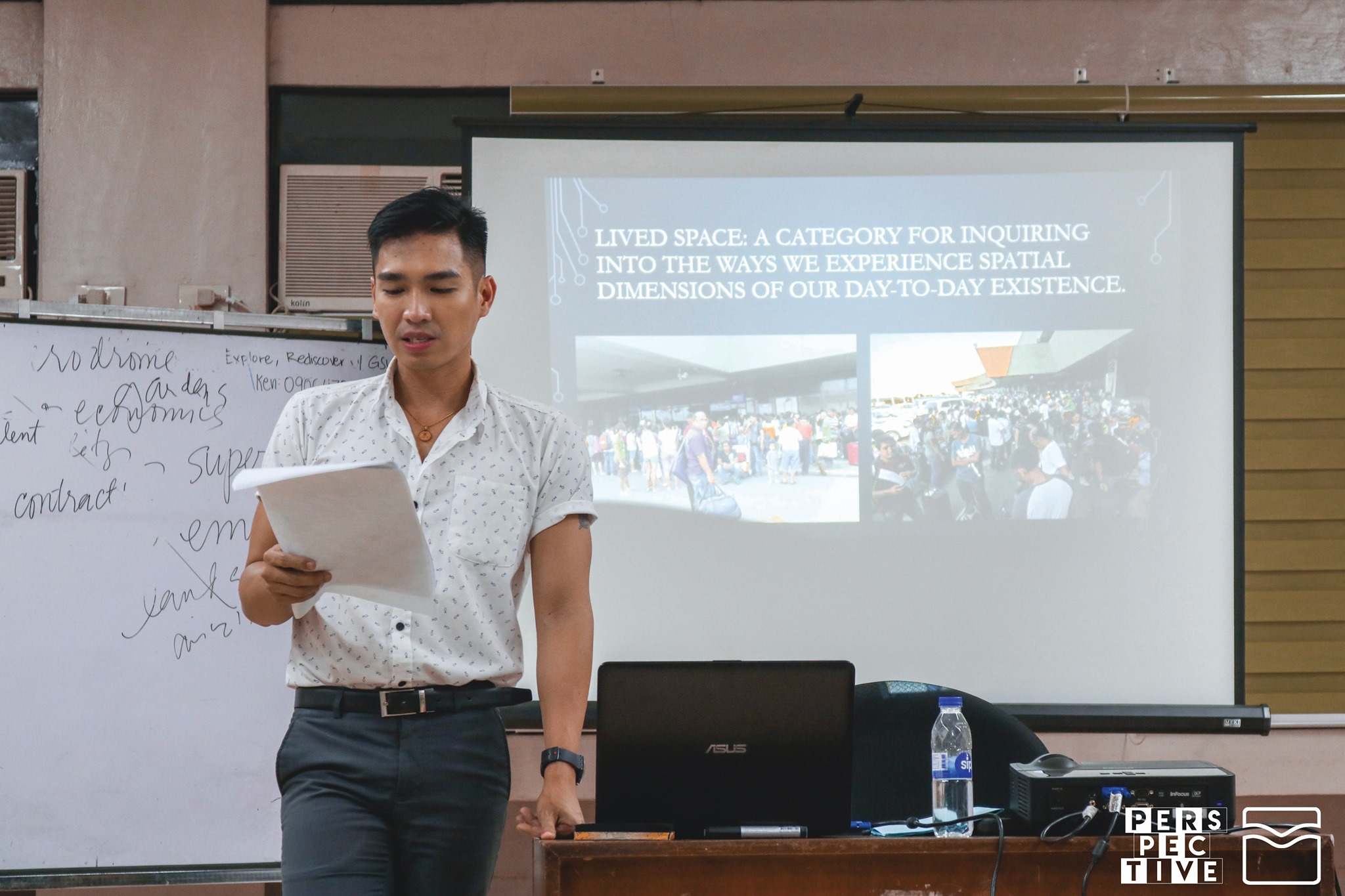 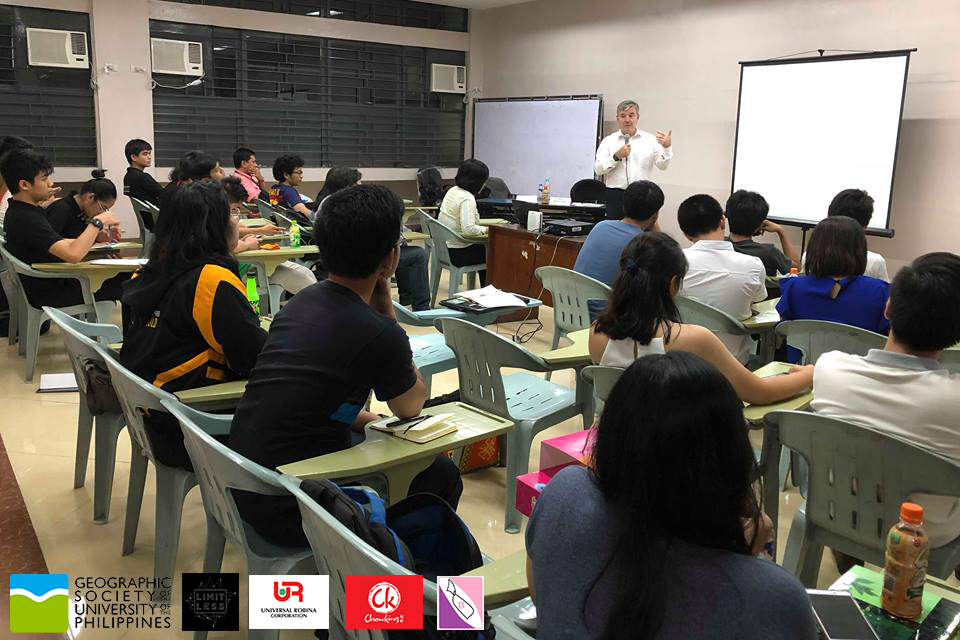 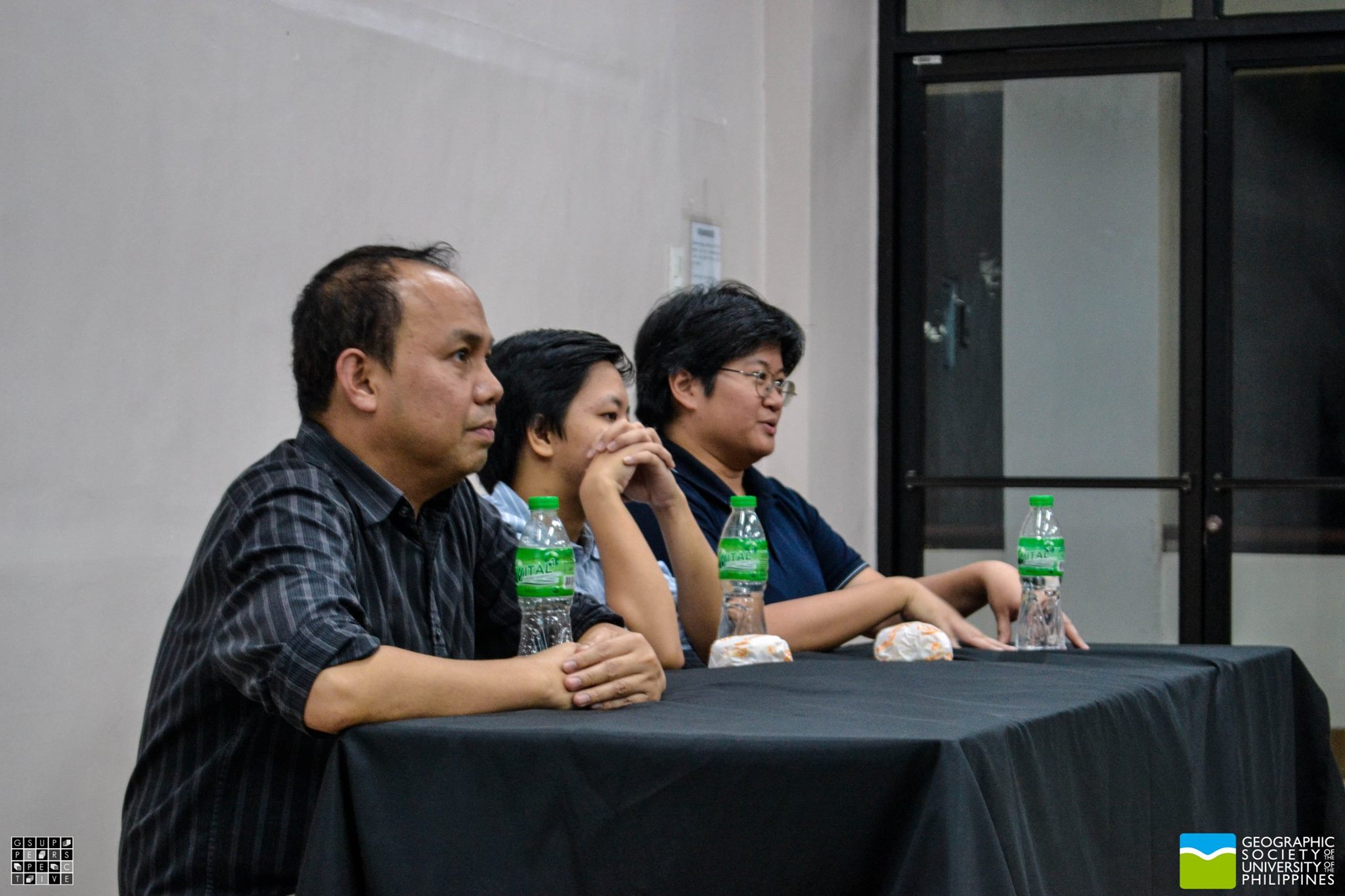 Perspective: The Geography Forum Series is a semestral forum that tackles various issues and discourses from a geographic point of view. Speakers are invited to talk about wide-ranging topics that are related to Geography. Topics in the past include Studies in Aeroportality: Destinations, Trajectories, and Possibilities, Waste and Space: The Geographic Movement of Waste, and Looking through the lens of the creator: The Geography of Cinematography. 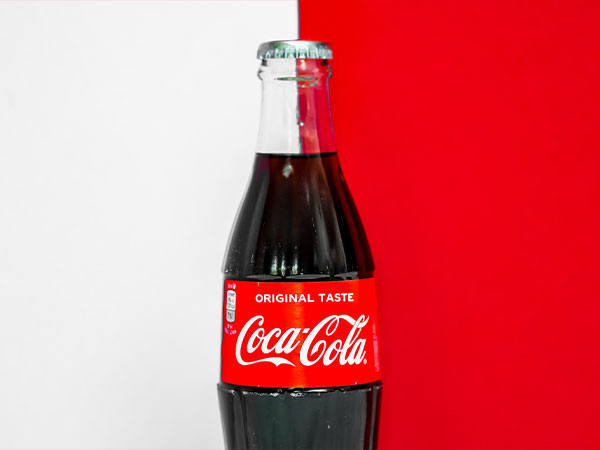 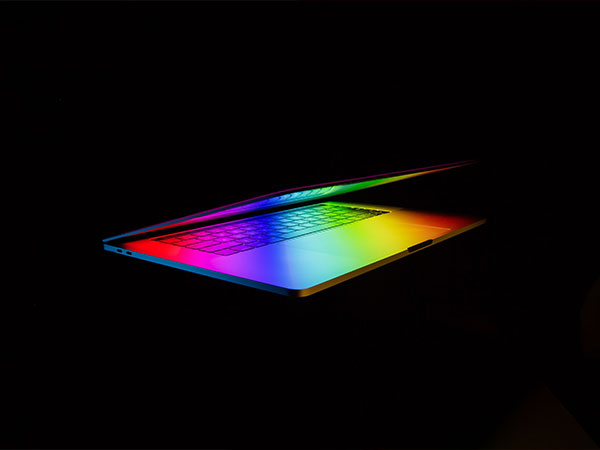 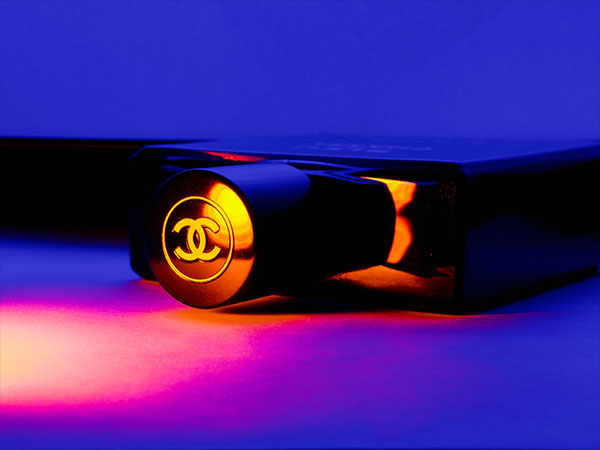